Some Landmarks of Pakistan

Pakistan is one of the countries in Sub-continent having rich culture and traditions. It has some of most magnificent historical buildings representing the grandeur of Muslim rulers and kings. People from all over the world visit Pakistan to see these beautiful buildings that are a cultural asset of Pakistan. Some of its historical places are described below which serve as a landmark of this country.

This mosque is situated in Lahore; the cultural and traditional hub of Pakistan. It was built by Mughal Emperor Aurangzeb. It is one of the major tourists’ attractions and is truly featured with the splendor of Mughal era. It is a master piece of architectural design having gigantic and spacious prayer hall. The floor of the hall is adorned with Sang-e-Alvi. The inner side of this hall is worth-watching that is decorated with mural work and fine marble. Other architectural features include spacious courtyard, four high minars, majestic entrance gate and dalans. 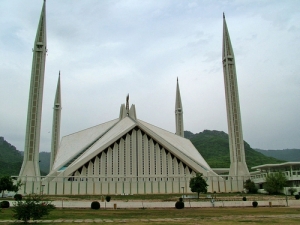 It is the largest mosque in Pakistan which has become a landmark due to its size and unique architectural design. It is so vast that 300000 worshippers can pray there. Its construction was funded by Saudi Arabian government and it is named after the late king Shah Faisal. It has a large triangular prayer hall and four minars. These minars are very slim and look like a pencil. The most attractive thing in Faisal Mosque is a large and splendid chandelier in the prayer hall. The walls of the hall are adorned with calligraphic art and mosaics which add to its beauty and making it a well-known icon of Islamabad; the capital city of Pakistan. In my opinion, this mosque should be visited as many times as possible because every time you will feel a great pleasure watching it.

The Khyber Pass is located in Peshawar, Pakistan. It is a mountain pass linking Pakistan and Afghanistan. It has been serving as a trade way between south and north Asia for centuries. It has been an important part of Silk Road. If you want to visit it then you will have to get full information about it because the road that leads to it is rough and barren. But it is a very good monument to see.

This monument is also located in Islamabad. It has been designed in a way that represents four provinces and three territories of Pakistan. It is in a shape of blooming flower representing growth and development of the country. Murals (wall paintings) are used in the inner side of the petal for enhancing their beauty and decoration. In the center there is a platform that has been made in the shape of a star having five corners. The star is surrounded by a crescent on which sayings of Muhammad Ali Jinnah and Allama Iqbal have been engraved.

These were some of the historical monuments of Pakistan and thousands of people come here to see their glory and radiance.

This entry was posted on February 14, 2011, 11:16 am and is filed under General, Pakistan, Pakistani Tourism, Top Tourists Destination, Tourism, Tourism Industry. You can follow any responses to this entry through RSS 2.0. You can leave a response, or trackback from your own site.