Most Visited Attractions in Chicago

Chicago is one of the largest cities in USA and is a popular tourist’s attraction all over the world. Do you want to know about its top rated attractions? You will definitely like to know more and more about this city if you have not visited yet. You have a plan to visit Chicago this year!!! That’s really nice. To make your planning easier, I have made a list of some of the most popular and visited attractions of Chicago.

Lincoln Park Zoo is the most beautiful and attractive zoo in the whole country and is featured with historical architecture and a wide range of wildlife. It is a huge zoo covering an area of 35 acres. This zoo was established in 1868 and since then it has been attracting a large number of tourists toward itself. Animals which you can find here include reptiles, monkeys, polar bears, gorillas and big cats like tigers and lions. Some other attractions in this zoo are:

Adler Planetarium and Astronomy Museum is undoubtedly one of the most loved attractions of Chicago. This attraction was built in 1930 and now it has been renovated recently and is featured with interesting displays including universe, solar system and old astronomical instruments. The Adler is the only museum in the world having two planetarium theaters named Sky Theater and StarRider Theater.

The North Avenue Beach is located near Lincoln Park. This beach is a worth-seeing site of Chicago and provides attractive opportunities to the tourists to enjoy their trip. Here you can swim or take a sunbath. Other attractions of this beach include snack bars and other modern facilities.

Magnificent Mile is a part of Michigan Avenue and has become a popular place for shopping. It has been featured with a large number of shops, restaurants, cafes, galleries and gift shops. That’s why it is one of the favorite attractions of tourists. Several shopping malls have also opened in this area including the popular Place Mall and Water Tower Place having large departmental stores. 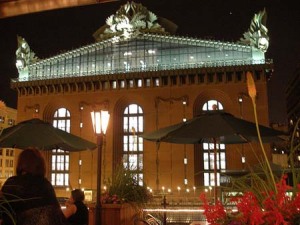 This entry was posted on May 23, 2011, 8:12 am and is filed under General, Grammar, To Do, Top Tourists Destination, Tourism, United States of America. You can follow any responses to this entry through RSS 2.0. You can leave a response, or trackback from your own site.